Posted on November 16, 2017 by nwharrisbooks

Clean Teen Publishing is proud to announce that the second book in The Last Orphans Series by N.W. Harris is now available in audio book format! Get ready to experience this exciting young adult science fiction novel in a whole new way. Download your copy today!

Take a deep breath before you start The Last Orphans Series. This action adventure series filled with cinematic science fiction action, end of the world apocalyptic events, and heart pounding thrills will leave you enthralled from beginning to end. Fans of The Hunger Games by Suzanne Collins and The Maze Runner by James Dasher will love this teen fiction series. With over 500 five-star reviews on Goodreads, this is definitely the series you should listen to next!

In the wake of the apocalypse, nobody is safe.

Shane Tucker and his friends thought they managed to save the world from the destructive machine that killed off most of its adult population. Unfortunately, a war nobody was prepared for has only just begun. Now they find themselves joining ranks with a secret organization that will train them to fight for the right to survive. Taking refuge alongside other teenage survivors in a hidden base set deep within the mountains, they will learn how to repel an imminent attack by an ancient race of aliens.

Determined to safeguard the children under their charge, Shane and his friends compete for the ultimate prize – a suicide mission against the flagship of the alien fleet. While Shane’s feelings for Kelly deepen, along with his need to protect her, he finds emotions clouding his judgment. He’ll gladly die for her. But he refuses to die with her. No amount of training can prepare them for what is to come. Everything the brave teenagers have endured thus far will be eclipsed, with the freedom of humanity hanging in the balance.

The Harvest is the second heart-pumping book in The Last Orphans Series by N.W. Harris.

LISTEN TO THE HARVES ON AUDIBLE or ITUNES

LISTEN TO THE FIRST BOOK TODAY: 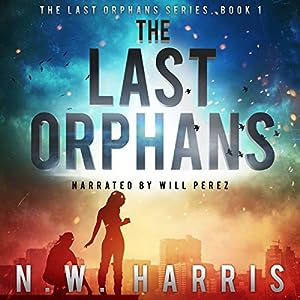 One horrifying day will change the life of 16-year-old Shane Tucker and every other kid in the world.

In a span of mere hours, the entire adult population is decimated, leaving their children behind to fend for themselves and deal with the horrific aftermath of the freak occurrence. As one of the newly made elders in his small town, Shane finds himself taking on the role of caretaker for a large group of juvenile survivors. One who just happens to be Kelly Douglas – an out-of-his-league classmate – who, on any other day, would have never given Shane a second glance.

Together, they begin their quest to find out why all of the adults were slaughtered. What they find is even more horrifying than anything they could have expected – the annihilation of the adults was only the beginning. Shane and his friends are not the unlucky survivors left to inherit this new, messed-up planet. No, they are its next victims. There is an unknown power out there, and it won’t stop until every person in the world is dead.

A spine-tingling adventure that will have you gasping for breath all the way until the last moments, The Last Orphans is the first book in an all-new apocalyptic series.

Born and raised in a small town in north Georgia, my imagination evolved under the swaying pines surrounding my family's log home. On summer days that were too hot, winter days that were too cold, and every night into the wee hours I read books. My face was rarely seen, always hidden behind a binding. I was nurtured on fiction. Now it is my turn to create some of my own. I live in sunny southern California with my beautiful wife and two perfect children (I may be biased). I write like I read, constantly. I studied anthropology at UCSB and medicine at SUNY Buffallo.
View all posts by nwharrisbooks →
This entry was posted in Uncategorized. Bookmark the permalink.