“The Father by N.W. Harris” is now available on Amazon.com

Posted on December 27, 2013 by nwharrisbooks

The second book in the “Joshua’s Tree Trilogy” is now available on Amazon.com and will soon be up on all other e-book retailers. Super exciting to have my second book published!!! Click on the cover image below to shoot over to Amazon.com and get your copy today! 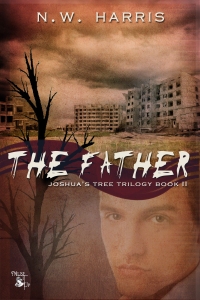 After discovering he’s destined to annihilate nearly all life on the planet, Joshua must take charge of a cannibalistic army of mutants with hopes of starting a civil war that will end the reign of evil—or bear the responsibility for destroying the few good people who remain on the planet.

Captured by the leader of the sweepers, Josh learns he will grow up to be a genetic engineer responsible for creating the flesh-eating monsters. The Father recruits him to lead an army of sweepers against the evil generals who resist the termination of the sweeper experiment originally designed to bring an end to a global war that threatened to render the planet uninhabitable. At first repulsed by his telepathic ability to control the sweepers, Josh becomes addicted to the power to control thousands of the creatures at once. Believing him dead, Nadia rejoins her people, where she struggles to gain respect while leading them to safety. Inadvertently pursuing her across the land, Josh may not be able to stop his sweepers from destroying Nadia and her dwindling tribe when they collide in battle.

Born and raised in a small town in north Georgia, my imagination evolved under the swaying pines surrounding my family's log home. On summer days that were too hot, winter days that were too cold, and every night into the wee hours I read books. My face was rarely seen, always hidden behind a binding. I was nurtured on fiction. Now it is my turn to create some of my own. I live in sunny southern California with my beautiful wife and two perfect children (I may be biased). I write like I read, constantly. I studied anthropology at UCSB and medicine at SUNY Buffallo.
View all posts by nwharrisbooks →
This entry was posted in Uncategorized and tagged Amazon.com, Book 2 Joshua's Tree, genetic engineering, Joshua, Joshua's Tree by N.W. Harris, N.W. Harris, Nadia, The Father, The Father by N. W. Harris, YA trilogy for boys. Bookmark the permalink.

4 Responses to “The Father by N.W. Harris” is now available on Amazon.com